Disney Vacation Club is amazing. Hands down, there are so many amazing, wonderful, fun, awesome things about DVC. Aside from the actual villas, the perks that you can get from a DVC membership are top notch… they’re really out of this world… and one of those perks is access to the Top of the World Lounge on top of Bay Lake Tower! (see what I did there?)

Heather and I went to the Top of the World Lounge last July on our BFF Birthday Bash trip, and had a blast. On this trip, I went twice. The first time, I dragged my mom up and we camped out at the bar. Later in the week, I dragged Michael and Little J and we staked out a table.

To get to the Top of the World Lounge, you have to check in with a Cast Member and show both your photo I.D. and your DVC membership card. The Cast Member then has to use his/her access card to let the express elevator take you all the way up to the 16th floor.

When Mom & I went up, the Lounge was pretty crowded. We managed to find two seats together at the bar though, where both the bartender and the manager were working. At one point, they were talking about how the bartender wasn’t even scheduled for that evening, and I said that I sincerely hope she was telling people, “I’m not even supposed to be here today.” (and if you don’t get it… well… it isn’t Disney related so I guess I can forgive you)

After looking over the menu and deciding that we weren’t going to get anything to eat, Mom picked an Apple Pie Martini, and I went with a Bay Lake Sunset.

Of course, we both sampled both drinks. Honestly, I thought that Mom’s martini, the actual drink itself, tasted better than my Bay Lake Sunset… but the garnish on the rim really weirded me out. The texture. I’d order the Apple Pie Martini again, happily, but I would ask for nothing on the rim. 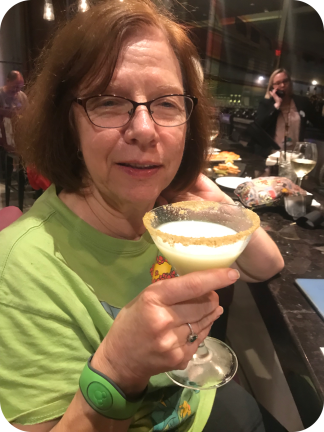 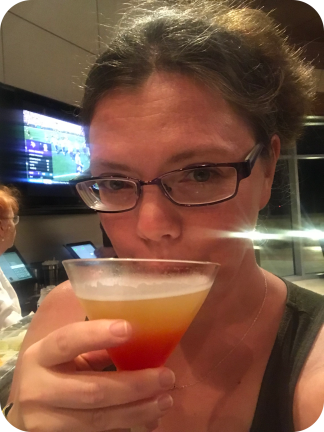 After the one drink each, we agreed that we should probably head back down and get some sleep, because we would be getting up early the next day to head to Hollywood Studios (except, spoiler, we didn’t wind up leaving early after all).

The next time I headed up to the Top of the World Lounge, I dragged Michael and Little J. It was just as crazy crowded as it had been with Mom, but we found a table and waited for the server to be able to get to us. There were a few servers rushing around dealing with several tables each, and I made the comment to Michael that they looked really harassed. He said, “Well, yeah… entitled DVC members, alcohol, end of a long day… I can understand them being harassed.” He probably isn’t wrong!

When our server, Emily, came over, we ordered. I was tempted to try the Seven Seas Lagoon shared cocktail just because it sounds totally over the top (Skyy Vodka, Parrot Bay Coconut Rum, Agave, Lime, Pineapple, Strawberry/Apple Boboa, and Swedish Fish, yes, Swedish Fish), but Emily talked me out of it. She said it’s really just too sweet, and I can definitely believe that! I went with a Monorail Yellow (Don Q Cristal Rum, Pina Colada mix, and Orange Juice) instead, because I’ve had it before and loved it. Little J got a Little Monorail, which is a Monorail Yellow minus the rum. No alcohol for the 7 year old! 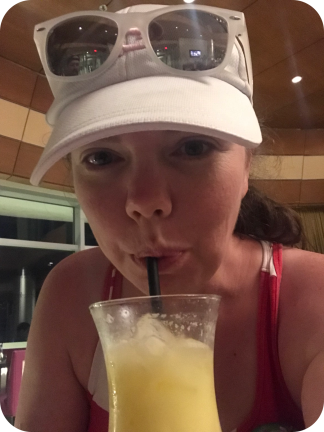 Michael & I tried to talk Little J into a slice of 7 Layer Cake, but he insisted he was good. Between that and finding out that Big J opted to stay in school instead of coming to Disney, Emily declared that we were doing an excellent job of parenting. She said it a couple times, “just in case you don’t hear that from anyone else, even though you really need to hear it.” Yes, Emily became my favorite server ever for that. I really did need to hear that then, because sometimes… it doesn’t feel that way, y’know?

After Michael & I finished our drinks, we headed outside to look out at Magic Kingdom. I will never, ever get tired of that view! 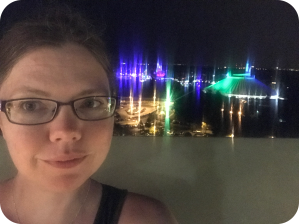