Two things I have to get out of the way right up front:

Now that I got those deep confessions out of the way… Instagram-worthy walls at Walt Disney World! There are so many around, because Disney really knows how to make an amazing park. The attention to detail is what puts Disney a step above, and that detail extends outside of the rides. For example, let’s check out wall #1…

I was a little bit sketchy on this one, actually. I had seen pictures and thought it was so cute and fun, but I kept reading that it was by the bathrooms and hard to get a picture. Hmm. I figured I’d check it out eventually, and got on with my day. Y’all probably don’t know this, but my mom is a huge Toy Story Mania fan. It is one of her absolute MUST DO attractions every trip she makes. So not surprisingly, we had TSM FastPasses! Well, guess what? You can find the amazing Popsicle Stick Wall as you’re leaving Toy Story Mania! Annnnnnd, bonus score: there was a PhotoPass photographer just hanging around! I made my whole group stop! 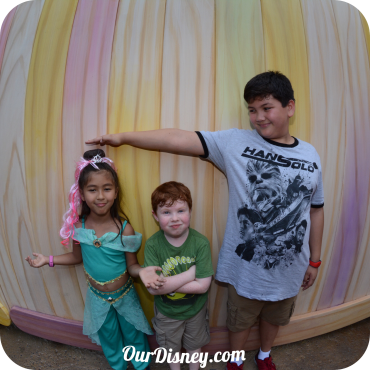 I’m not entirely sure what is going on in this picture (& doubt they knew themselves), but it sure is a whole bunch of cute!

In honor of Toy Story Land, I convinced Michael to be the Buzz to my Jessie, because let’s face it… Buzz and Jessie are the best Disney couple out there. I’d say change my mind, but you can’t. I hope Michael always looks at me like Buzz looks at Jessie. Anyway… so that’s the Popsicle Stick Wall! Moving along to wall #2 now.

Pink is pretty much my favorite color ever, so of course I love this one! This was probably the first InstaWall I learned about as being a Thing, and I remember thinking “Oh man, I know that place! And I love it! Why haven’t I ever taken a picture there before?” Then I started thinking about all the other places that would make cool background walls… then I started researching and seeing so many are already a Thing.

This is probably the most famous of all the Instafamous walls out there. Everyone knows the Purple Wall in Magic Kingdom! Okay, maybe they don’t, but they should. There was a big uproar last year when Disney decided to revamp the Purple Wall and add a geometric design, but considering the fact that they didn’t cover the ENTIRE solid-purple wall with the geometric design the furor was overblown. IMO. I think the design is really cool, honestly. I also like the solid purple wall. I’m not hard to please!

When we first got to Magic Kingdom, we headed straight back to Tomorrowland, going through the Tomorrowland Terrace Restaurant to get there (and conveniently, to pass by the Purple Wall). I had my mom take my picture, of course, and Little H hopped in with me.

We went about our business after that, hitting up Buzz Lightyear’s Space Ranger Spin and doing a little shopping, before deciding it was time for lunch. We opted for Casey’s Corner and headed back to Main Street the same way we left it – via the Tomorrowland Terrace. And guess what? Standing by the Purple Wall was a PhotoPass photographer! Yassss! I love me some PhotoPass! And this lady really, really got into it. She was all “put that foot up, a little lower, okay now tip one shoulder down, tilt your head, wink at me…” I mean, she really had fun with her job!

Okay, so as far as I’m aware, this isn’t actually an Instagram Wall, and I don’t see how it could catch on – this wall is in the Buzz queue. People wouldn’t be able to get to it without standing in line for Buzz (and actually, come to think of it, this particular shot was from the FastPass+ line – I don’t even know if the standby has the same wall). That said, I think its a fun, cute wall… and I love this picture of Little J. It cracks me up every time.

I was excited to go to Disney in September because I knew the crowds would be less and I figured it wouldn’t be tooooooo hot. Sure, its Florida, it is rarely actually cold, but September is surely not as hot as July or August, right? Well, in general it isn’t… but we happened to go when Orlando was having record breaking high temperatures for the season. No joke. My mom watches the news every morning and the newscasters were talking about the record setting highs. Ugh! So in this picture, Little J was just over it. The sun was unrelenting (what happened to the daily rain showers I was expecting?!), and it hit 100 more than once.

So that’s that. I’m heading back to Disney next week, and I hope to get a few more Instagram Wall pictures, but since I’ll only be there for a few days I don’t make any guarantees.

QotD: Do you think the whole “wall craze” is fun and cute, or weird and useless?

One thought on “instagram-worthy walls”