The other day I told Michael that I had blogger’s block. I couldn’t think of what to write about next! He said “remember I told you to write about rainy day things to do?” He’s right, he did say that. While we were still at Disney. While it was raining!

The more I starting thinking about a rainy day post though, the more I wanted to change it to the things to do when you’re not going to the parks, no matter the weather. I know it seems crazy to even think about being on a Disney vacation and not going to the parks, but it happens! When Michael and I went in July 2017, he didn’t have park tickets at all and so we did all sorts of non-park stuff. Actually, when we went July 2014 for my 30th birthday, we only spent my actual birthday inside Magic Kingdom – the rest of the long weekend was spent in Disney Springs or the resorts.

For now, I’m going to write about things to do in the resorts. Not Disney Springs, because that’s a whole post on its own!

Shopping: hehehe, it’s Disney! There are gift shops everywhere! But really, you can find some neat things in the resort gift shops – often items unique to that resort. I like to wander around and see what’s available throughout my stay, and don’t actually tend to buy my souvenirs until the end… after I’ve checked out all the options.

Pools: All the Disney resort hotels have at least one pool. I am not a swimmer (yes, I can swim – I can swim quite well, actually – I just dislike swimming) and I don’t lay out to tan, so this isn’t really high on my favorites, but I understand that puts me in the minority… and even I have to admit that the pools we’ve hung out by have been really swank. The kiddy pools can get really elaborate too! Like the Paddock pool at Saratoga, which has a water slide and sprinklers.

And the Cast Members will really have fun with you too. We’ve been to swim-dance parties, and trivia games, and all sorts of fun stuff besides actually just swimming.

Playgrounds: For the littles, there are playgrounds at most of the hotels. Exceptions are: Beach Club, Contemporary, Grand Floridian, Polynesian, Wilderness Lodge (including Boulder Ridge and Copper Creek villas), and Yacht Club. We’ve never actually been to the playgrounds because my kids are total water babies and if you give them the choice between a playground and a pool they’re going to pick the pool. Every time. But I know the Disney playgrounds would be absolutely epic.

Arcades: Most of the resorts have an arcade somewhere in or near the main building. I myself have never played,  but I’ve let Big J go in a few times. Instead of needing to stockpile quarters for the games (a la the arcades of my youth), you’ll find the kiosk inside where you can get a reloadable Game Card. The cards can be paid for with either cash or a credit card, but not a Disney gift card, and are then used to play. And the cards can be used at the various locations! On at least three trips a random child has come up to us, offering us their Game Card because they were about to leave Disney and didn’t want the card to go to waste. Keep the magic going, y’all!

Movies Under the Stars: This is obviously dependent on weather, but the resorts will set up a giant screen and play movies outside. I didn’t know this was a thing until we stayed at Old Key West in 2012! Little J was just over a year old so he & I spent a lot of time hanging out in the room while everyone else spent a lot of time at the pool, and I distinctly remember Michael and Heather both texting me “You need to get out here! This is so cool!”

Monorail crawl: There are 3 hotels on the monorail line: the Grand Floridian, the Contemporary, and the Polynesian. They all have tons of fun inside! The theming of each is so vastly different, and so very fun. There are restaurants and bars – I adore doing the loop and just eating and drinking at each hotel. I’ve done this with both Heather and with Michael. Even though we couldn’t get a dinner reservation for California Grill at the top of the Contemporary, we were able to go up for cocktails and appetizers. We got a very tasty charcuterie board and flatbread. All of the resorts are stunning and well worth a visit even if you don’t get to stay there often (or ever) (I’m looking at you, Poly). 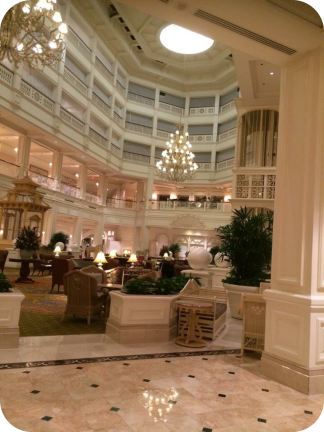 The Grand Floridian lobby. All of the hotels are stunning and absolutely worth a visit to see in person!

So! Much! Food! We stopped here for appetizers before dinner, and really could have eaten this as our dinner.

Mini golf (& ‘real’ golf): There are a couple awesome mini golf courses around the WDW resort area, both with two separate 18-hole courses. Winter Summerland is just outside of Blizzard Beach; Michael and I went there in July and had a ton of fun – even in the rain! The course is designed to basically look like the North Pole, if the North Pole was at a sunny tropical beach. I adore mini golf & I adore Santa and his elves, so that was a no brainer for me! Fantasia Gardens and Fairways Mini Golf is at the Swan hotel by the Boardwalk. This one is designed to mimic scenes from the Disney classic Fantasia. We haven’t been there yet, but I’m definitely looking forward to going soon!

Michael totally kicked my heiny but it was so much fun anyway! 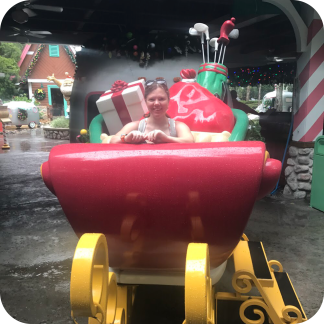 As for ‘real’ golf, there are three courses of different “levels” by the Polynesian Resort and one by Saratoga – we’ve stayed in rooms overlooking the Saratoga course. Let me be really real honest here: I adore mini golf, but I loathe ‘real’ golf with the passion of a thousand burning suns. My daddy is a golf fanatic, and the long, hot summer days spent on the course kind of soured me on golf. So I’m just gonna tell y’all that Disney claims the courses are great, and you should trust Disney on that.

Pokemon Go: I know, I know. You’re probably rolling your eyes at me thinking, “Katie that is so 1998 of you” but seriously. Disney is a Pokemon mecca, and yes, my family plays. There are Pokestops all over the place, what with all the super cool attractions and art at Disney, and lets not even get started on the gyms (guess who caught herself a Lugia in a raid battle at Saratoga? Don’t be jelly)! Walking around to hatch those cute little monsters is a fun way to explore the Disney resorts (and, yes, Disney Springs, and the parks too!).

Simply being at Disney is really fun for me. I love the parks – I love the parks – but I know that I can have fun at Disney without ever setting foot inside a park, too. If you ever take a Disney trip and plan some non-park downtime days, think about really exploring all the fun your resort has to offer. I really don’t think you’ll be disappointed at all!