Race number 2 for the weekend was the Walt Disney World 10K, which runDisney describes as a “thrilling 6.2-mile run throughout Epcot®.” For months leading up to registration, a couple of my ‘mom friends’ and I had been talking about running this together. We were going to be a trio of Minnie Mouses! Alyssa and her baby stayed in the suite with Michael & me, and while Natalie was staying with family in town, she spent Thursday night with us as well so we could all head out together in the morning.

Unfortunately… when morning rolled around Alyssa said her boy had been up all night with a fever. Nooo! The poor babe was miserable. Alyssa wound up staying at the hotel to be with him. As sad as it was, I had to keep myself from giggling because I just kept thinking “our trio’s down to two!” Natalie and I got ready and headed out.

Oh! Side note: the suite we were staying in was a 2-bedroom lock-off. Instead of a dedicated two bedroom suite, it was essentially a 1-bedroom suite with an attached studio… and studios don’t have a full kitchen with real dishes. I totes stole all of Alyssa’s disposable cups to use on the way to the races! Unfortunately, the pot of coffee I made was awful. It was basically hot water. No coffee flavor at all. Oops!

Moving on. We got outside, and there really wasn’t a bus line. We boarded and chatted away the ride to the start. Once there, we stopped for a couple of pictures but then headed straight to the corrals. Look how adorable we are! 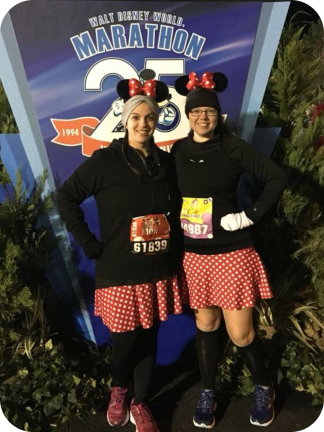 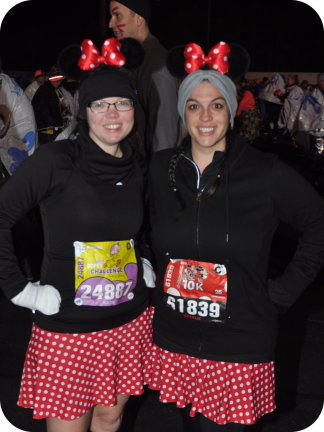 I really feel that the crowd hype was lame for the 10K. Maybe I was just distracted by talking with Natalie, but I don’t think so. There wasn’t all the “get pumped up” music of the day before. I don’t even remember Minnie Mouse coming out like Pluto did for the 5K. Oh well…

We finally took off down the road. It was so cold! According to the weather channel it wasn’t as cold as the day before but it sure felt like it… I just know that I was cold enough that I was having trouble running. My muscles didn’t want to work right. We passed the first mile marker, and a character stop (of course I can’t remember who!), all while alternating running and walking. We weren’t doing set intervals, just running when we felt like it. All of a sudden… running HURT! Seriously, we ran and I was fine. We went to a walk and I was fine. We took off running again, and my knee was on fire. It got worse and worse until we were basically only running when we saw a photographer… 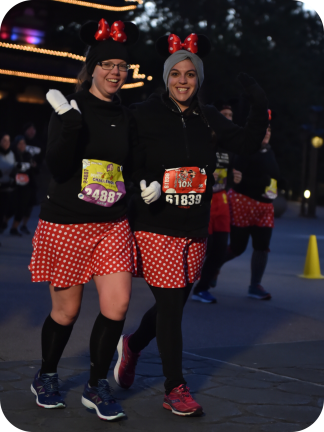 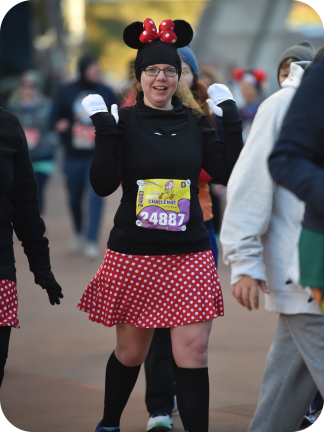 We passed a few more characters that we didn’t stop for, like the Vikings from the day before, but in France we saw Marie! I’ve never actually met Marie before, and we were going so slow by then (because of my knee) that stopping for the line wouldn’t matter anyway. 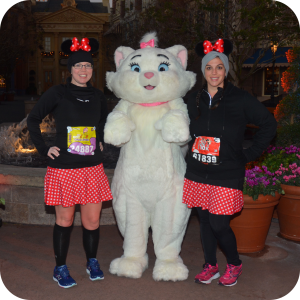 We continued on and headed out the International Gateway to the Boardwalk. I love running on the Boardwalk because there are always people out cheering. We saw a guy (gal?) in one of those inflatable T-Rex costumes! Lots of people holding signs too. Once we headed back along the Yacht & Beach Club I told Natalie that I didn’t think I could do any running anymore, not even for the photographers. Until then, I had only been hurting while running, but that hill leading back to the park had me in pain even while walking.

We passed Duffy, and Natalie said we had to stop. I was like “are you kidding me, Duffy isn’t even a real Disney character!” but she insisted. Okay. Fine. I told Michael about it later and he said “but Duffy isn’t even a real character!” HA! It was cool though, at that point I was getting texts from friends back home, cheering us on, so I chatted with them a bit, let them know about the knee. 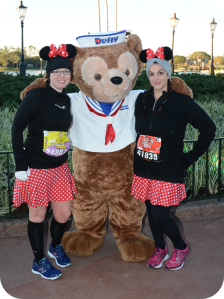 Continuing on, we of course had to stop for a ball picture. And of course again I look like the biggest doofus on the planet, but oh well. One day I’ll be able to take a picture without looking like an idiot. Not sure when, but one day! 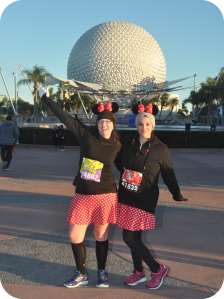 We continued on, and headed out of Epcot to the finish line. I was just thinking “Thank you Jesus, I am so done already!” by the time we got there. 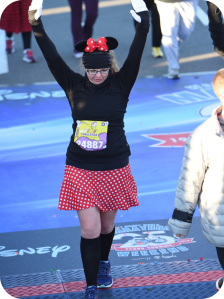 Getting through the medal and heat sheet line wasn’t so bad after the 10K. Things still weren’t clearly labeled and there were still crowds, but at least the sun was up and people weren’t so pushy. We grabbed our drinks and food, and headed to the finisher picture area. I know that we got a picture together, and I feel like I saw it the day of the race, but it appears to have disappeared from my PhotoPass. Oh well, it would just be one more picture where Natalie makes me look like the ugly stepsister, and since this is my blog and not hers, that’s not cool. Not cool at all, bro. 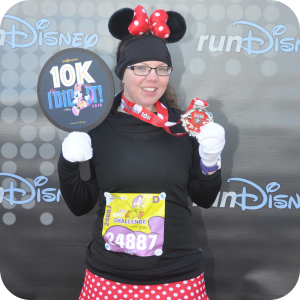 It’s been almost two weeks and I’m still super disappointed that Alyssa wasn’t able to run with us, but I had so much fun with Natalie. Even with the bum knee. We legit spent a solid 24 months talking about doing a runDisney race together, so it finally happening was like a dream come true. And while some things seemed a little… sub-par… overall the WDW 10K was a well done blast. There were characters aplenty, lots of photographers, and nothing beats running through a Disney park!

PS: about the knee: so I posted on Facebook in a Dopey Challenge group I was in. One of the ladies sent me a message that while of course I don’t know her from Adam, she and her husband are doctors and they’d be happy to look at my knee for me. I really didn’t want to go to an out-of-network doctor so I said “yes please!” I figured if they sounded like quacks I could still get a second opinion :p Essentially, it was runner’s knee, which I had heard people mentioning but had no clue what it was. My kneecap was deciding to act a fool. Her husband told me that his knee acts up too, and he was going to be taping it, so Michael & I headed to the expo to learn how to tape up my knee. Did it work? Read the half marathon recap and find out!